﻿
Tourist visa to Bulgaria for citizens of Uzbekistan issued by the Bulgarian Embassy in Tashkent. Visa is issued within 10-15 days. When submitting documents not expect that the Embassy of Bulgaria in its inner working schedule. This means that the Embassy can not work weekends and holidays in Bulgaria, so ask about work schedule in advance. Bulgarian Embassy charge for their services consular fee of $ 90USD.
Required documents for a tourist visa to Bulgaria:
For minors: copy of birth certificate
For minors traveling without their parents or guardians:
For pensioners: pension certificate and photocopy
Bulgaria - a country in Southeastern Europe, on the east of the Balkan Peninsula and covers about 22% of its area. The country received its 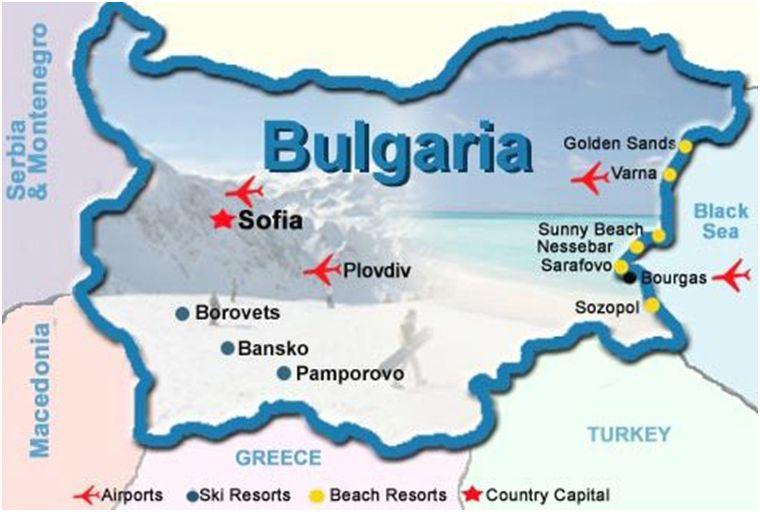 name for the established name of old people - the Bulgarians. To the east Bulgaria bordering the Black Sea, and in the south Bulgaria borders with Turkey, Greece, Macedonia and Serbia, in the north of the border with Romania. Bulgaria is a very popular seaside resort with an excellent climate and conditions for recreation at the highest level.
area: 111 sq. m. km
Population: 9 million. man

The import of drugs and weapons, export of works of art and objects of historical, artistic or scientific value.

Bulgarian lev. 1 lev = 100 stotinki. Import of foreign currency is not limited (declaration required), the national currency - is prohibited. Export of imported foreign currency is allowed, national - is prohibited. Currency exchange is not limited and in banks, hotels, airports and exchange offices (we recommend to specify the amount of the issuance of advance, as sometimes charged fees). In hotels and airports exchanges around the clock. When leaving unspent money can be exchanged for any currency.

Public transport is represented mainly by private and public buses and trams in Sofia. You can enjoy all kinds of public transport. The ticket bought from the driver or conductor. Also sold daily, weekly, monthly and other tickets. Taxis can be stopped on the street. Payment in the taxi on the meter, from 22 to 5:00 fare is doubled. To rent a car you need: passport, driving license and a cash advance.

International telephone are on the streets and all major post offices. In another country or city can be using a calling card (available at post offices and hotels).

Temperate continental, in the southern regions of the rolling-Sea to the Mediterranean. The air temperature in the summer months, 23-27 ° C, water - 20-25 ° C. In the summer months the temperature rarely exceeds 28 degrees, and the water is heated to 25 °. Yes, the water in the Mediterranean in August and is 30 °, but what there is heat! Here, the sea breeze does not allow "fry", even on the hottest day.

There is a wide hotel chain categories ** - ***** stars, as well as private hotels and apartments.
Recently Hotel Fund actively reconstructed the country, and by the beginning of the season each hotel holds redecorating. Most hotels - 3 * and 3 * luxury. "Fours" and "fives" in the country every year there are more service there at the European level. Meals more often - on the basis of breakfast ("buffet"). Particularly popular and resorts in Bulgaria, especially in the area of ​​Pomorie and Burgas.
Almost all ski hotels Bulgaria recently renovated, are consistent with their "stardom" and performed in alpine style. The most common circuit board - breakfast.

You can purchase spirits from the Valley of the Roses, ceramics, handmade silver, leather, national souvenirs.

The national dish - "chorba" (soup). Try the soup of sour milk with fresh cucumbers - "tarator". The most popular dishes are: "kebabcheta" (fried meat sausages), "kavarma" (meat or vegetable strudel), "Fraction sarma" (chop liver lamb with rice and egg), "Sarmi" (stuffed grape leaves), "kebab" (meat on a spit), a dish of stuffed vegetables, puff pastry with cheese, meat or spinach - "banitsa" dried beef - "pasterma" watered-famous Bulgarian yoghurt with cucumbers, nuts and spices, sweets from - " baklava "," Ravana "... wine country - in every agricultural region has its famous wines: in Laskowice - champagne, on the Black Sea coast -" Dimyat "in Plovdiv - Pamid in Asenovgrad - mavrud. Also popular: "brandy" cognac "Pliska", mint liqueur, from hot drinks - coffee, from refreshing - "Hayryan" (a drink of water and yoghurt).
All this you can try and evaluate the many restaurants, pubs in the national style, snack bars, pizzerias, cafes and pastry at very affordable prices.
Tipping. The restaurant, taxi - 8-10% of the bill. Sometimes the tip is already included in the bill. Also tipping porters and maids in hotels (at its discretion).

Across the country there are a large number of mineral springs. Many hotels on the coast of tap water - mineral. We also recommend you drink water from plastic bottles.

Bulgaria has 4 international airports - Sofia, Varna, Plovdiv and Burgas. Two of them: Varna and Burgas are located on the coast.
Varna Airport is located in the north of the Black Sea coast of Bulgaria in close proximity to the sea capital of the country - the city of Varna and one of the most prestigious Bulgarian korortnyh complexes - Golden Sands.
Bourgas Airport - is an international airport with predominantly tourist charter flights. It is located on the Black Sea, and serves the south coast resorts.
How to get to our tour of Tashkent Sunny Bulgaria faster and cheaper? Unfortunately direct flights, Tashkent - Varna or Tashkent - Burgas we have. There are a few options that we'll now consider, but our tourists should be prepared for the fact that it will be necessary to do at least one transplant. You can use regular flights Uzbekistan Airways on the route Moscow-Tashkent Tashkent, Tashkent, Istanbul, Tashkent, as well as Tashkent, Kiev, Tashkent.
Then, after arriving in Moscow, Istanbul and Kiev needs an internal flight from Moscow to Varna, Burgas, Moscow, Istanbul, Varna, Varna or Kiev, Kiev - Burgas.

"When the Lord is generous, he paints the world with three colors: blue - sky and sea green - forest, yellow - ancient sand and ripe peach." It is these three colors painted the famous resorts of Albena, Golden-Sands and Sunny Beach. The ancient Greeks called the Black Sea "Pontus Euxine" - hospitable sea. On the Bulgarian Riviera sea is really tempting and hospitable - clean and quiet, without tides, at a distance of 100-150 meters from the shore is shallow and safe. Many people prefer a combination of high-grade marine recreation with the romance of the ancient town of Balchik, Nessebar, Sozopol.
For fans of more direct contact with nature - hundreds of small private gostinits.Udobny rail, road, sea and air transport (international airports of Varna and Burgas) connects the Bulgarian Riviera with the rest of the country and the world.
﻿