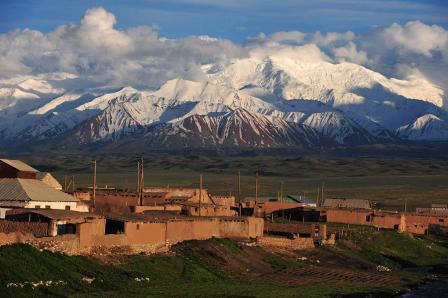 Jewel in the crown of the ancient Asian empires, Kyrgyzstan is little studied by domestic tourists. And it is in vain - the abundance of natural and historical attractions, opportunities for beach recreation, treatment and skiing, this country is truly unrivaled. On the territory of Kyrgyzstan are "Celestial Mountains" Tien Shan and Pamir mountain ranges stretch here conceals wealth of Genghis Khan purest alpine lake Issyk-Kul, grow relict walnut forests and beat hot sulfur keys.
The Kyrgyz Republic is located in the east of the Central Asian region. In the north Kyrgyzstan borders with Kazakhstan to the west - with Uzbekistan, in the south - with Tajikistan, in the east and south-east - with China. Former republics of the Soviet Union - Kyrgyzstan declared its independence in 1991 and since then is a democratic presidential republic. Bishkek (formerly Frunze) - the capital of Kyrgyzstan, with a population of about 1 million. Inhabitants. In the country as a whole is home to about 5 million people and an area of ​​Kyrgyzstan is 198.500 km ²

The climate of Kyrgyzstan

In Kyrgyzstan is continental with the transition to a continental climate. Rainfall is relatively small; in the year of about 250 days of sunshine. On the plains and in the lowlands the average temperature in January - 6 .. -4 ° C, in July - 18 .. 24 ° C. In the high mountains in the winter and cooler in the summer because of the constantly blowing winds from Siberia: -14 .. 20 ° C in January and 8 .. 12 ° C in July. In the Ferghana Valley in the summer the thermometer usually rises above +35 ° C. The best time to visit Kyrgyzstan - September, when the whole country a pleasant autumn heat. On the alpine pastures "jailoo" can go from mid-May to early October, hiking and horseback riding comfortably spend from March to November in the south and from April to October in the north. Trekking and climbing are available throughout the year, with the alpine climbing perform better since the end of June to October.

You can exchange money in banks and licensed exchange offices. Banking hours are usually from 9:00 to 17:00 from Monday to Friday; "Exchangers" - a lot longer than seven days a week. By sharing happy to accept dollars, the most favorable rate - for banknotes of 100 and 50 USD. However, the European currency can also be exchanged without problems in Bishkek and Osh. It is recommended to change the currency in the capital as in the provinces rate may be lower.
Withdraw money from a credit card you can freely in Bishkek and Osh, in other cities may be difficult to find an ATM. By the way, the machine issues like catfish and dollars. Pay with a credit card can be only in a few major hotels, restaurants and shops of the Kyrgyz capital.

Kyrgyzstan - it is a safe country for Russian tourists. It should be the normal caution: do not walk at night in unfamiliar places, keep an eye on handbags and purses, beware of pickpockets in crowded places and avoid noisy party of "tipsy." Despite the fact that the majority of Kyrgyz Muslims are relatively free reign morality, especially in the capital: a walk "the handle" and other displays of affection are not chaste draw surprised looks. At the same time, going to remote places, better keep a low profile and to dress appropriately: no mini and transparent chiffon.

The most popular way to travel between cities and villages of Kyrgyzstan - buses and taxis. The first de jure depart on schedule, and de facto - when the interior is filled as much as possible, the second touched in a way only when they are busy all the passenger seats. Minibuses are a bit more expensive bus: for example, a trip from Bishkek to Balykchy town by bus will cost about 3,5 USD, on the bus - in 4,5 USD. If you want to go immediately, you can just pay for the remaining seats. The same principle can rent a minibus for a whole day at a bargain price.
Domestic flights "Kyrgyzstan Airlines" bind Bishkek Osh (four times a day, 1 hour flight), Jalalabad and Batken.
By train you can travel between Balykchy, Tokmok and Bishkek and Kara-Balta. Trains twice cheaper routes, but the journey is twice as long.
In the cities of Kyrgyzstan should move in a taxi - they are not expensive.

From Kyrgyz felt hat can be brought "kalpak" and objects of the national costume: quilted robes "ichken 'trousers and swinging skirts, leather shoes, traditional vessels and cases of skin - for example, for the manufacture, storage and serving koumiss. Business card crafts Kyrgyzstan - felt carpet "shyrdak" from sheep's wool decorated with bright national patterns. These rugs are not cheap, but it is truly eternal. Pay attention to the wood products: chests and boxes, cases, stands, interior and chess. The fair sex will appreciate the Kyrgyz jewelry: habitual bracelets, rings, earrings and exotic forehead and navisochnye suspension.

Kyrgyz cuisine - meat and plenty of it "wet" foods: soups, broth-based dishes and foods with gravy, as well as dairy products. Meat is mainly used lamb and horse meat, eaten as beef and poultry, but the pork - for religious reasons - the menu Kirghiz not at all. One of the most popular dishes - "beshbarmak" ("five fingers"), which is made from lamb. Meat boil, on the first meal is served broth and then the individual pieces of meat, as a prelude to the second and then finely chopped meat and the remainder was mixed with the broth and noodles. It offers a traditional delicacies - cheeks, brain and eyes. Another favorite dish of all - boiled horse sausage "chuchuk." Its use, both independently and as part of other dishes. Many dishes come in the national cuisine of Kyrgyzstan from neighboring countries: soup "shorpo" pilaf and shish kebab, samosa and manta rays - and they enrich the local nuances and is already perceived as native Kyrgyz. Best pilaf, for example, are considered to Osh. Fatty foods washed down with milk drink - mare's milk based on mare's milk, ayran and local varieties of yogurt. In all other cases use in a variety of tea: green or black (hereinafter referred to as "Kyzyl tea" - red tea) with nuts, dried fruits, cakes and pies.