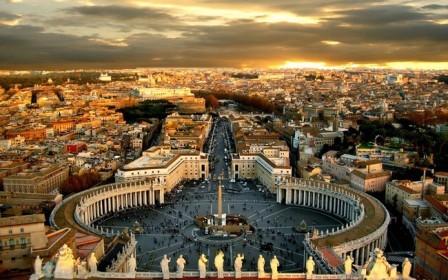 If you come up with the perfect country for tourism, the list will necessarily be "humane" climate, the diversity of natural landscapes (to the mountains and the sea, and lakes, and plains and cliffs), a rich cultural life and no less rich history, good and different hotels, convenient transportation system ...
The most resourceful will make the list of the elite resorts, gourmet cuisine, quality wines, friendly locals. The list can be arbitrarily long, but still a few countries it will match - three, maximum four. And in the first place among these tourist destinations, ideal for most travelers would be Italy.
It is as if specially invented for tourists - in any case does not leave any visitor thought that it was his then long awaited and prepared for the visit in advance, taking into account all even the unexpressed wishes.

The climate in Italy

The length of Italy from north to south - about 1200 kilometers, which in itself determines major climatic differences in different regions. His contribution to the diversity of the climate make the mountains and the sea surrounding the peninsula.
In the north, in the Alps, there are areas with a continental climate, but for the most part in the alpine zone of temperate climate, with winter temperatures in the foothills near zero. In most parts of mainland Italy, the climate is subtropical, and on the coasts and islands - classic Mediterranean, when eight months of the year a great sunny weather, and the other four - just good.

In the Italian tourist classics presented mostly fruit of human hands - architectural masterpieces and historical monuments, sculpture ... St. Peter's Basilica, the Sistine Chapel, the forums. Pantheon and the Coliseum, Trevi Fountain - everyone would call their "most-most" outstanding location in Rome.
The cradle of the Renaissance, Florence - all open-air museum. And there are still unique in all respects Venice, Pisa has a falling bell tower and Milan with a mysterious Duomo. The more the list, the greater understand - it is useless. Bridges, palaces, monasteries, castles, villas - each area of ​​Italy without an account of historical monuments, the only difference is that some have become world famous, some not - but all are fine, it is easy to make, going to travel on any corner of Italy.

If the "run" in Italy from north to south, the first we find ourselves in the Alps, and in almost the most picturesque areas of the mountain range - the valley of Aosta and South Tyrol, enjoying the gentle love of skiers around the world.
In the north of the country and are essential for the economy of Turin and Milan. Here and shopping, tourism and business, and a lot of tourist attractions and luxurious Italian Rivera on the Ligurian coast (Genoa). On the other side of the peninsula - does not require advertising in Venice, and between - Pisa, Bologna, Florence. The middle part of the Italian "boot" - a metropolitan region of Lazio and it is impossible beautiful mountain, overlooking the Adriatic, the region of Abruzzo.

In Italy, a relatively safe, but some precautions are necessary: ​​to avoid visiting the affected areas (in Rome, for example, they are adjacent to the train station Termini), women are advised not to make evening walks alone. Since cities are active professional pickpockets, do not carry more cash than you need to show them in the presence of strangers, to carry money and documents in a pocket or a bag. A good idea would be to make certified copies of the documents and bring them to the originals, instead of moving around the city.
In large cities (especially in Rome and Milan) and the popular resorts of widespread theft handbags Pass lads on motorbikes. It is recommended not to walk on the edges, and if "Rome Witch" still enchanted beauty of its routes, the bag is held in the hand opposite carriageway. Pickpockets are operating in public transport and tourist attractions at the flea market.

Currency can be exchanged at exchange offices, banks and post offices. At the airport of course less profitable, but there are exchange points around the clock. Banks are open Monday through Friday from 8:30 to 13:30 and 15:00 to 16:15, Saturday and Sunday - closed.
In the cities, many restaurants, hotels, shops and department stores accept Visa, American Express, Mastercard, Diner's Club and Carte Blanche. If the institution receiving the card, usually hang out in the advert «Carta - si». At most gas stations require cash payment. In rural areas, payment cards difficult.

Beaches on the Italian coast - municipal. But they are often divided into plots and leased to entrepreneurs. Each site has its own "Banin" - beach ranger who keeps order and cleanliness, will charge for the use of umbrellas and sunbeds (about 10 EUR per kit). According to local regulations, the first 5 meters of beach by the water's edge - free: it is possible to sunbathe on a towel, without spending a dime.
Being on the municipal beach from 1:00 to 5:00 in Italy it is prohibited by law. The beaches are patrolled by the police, which is fine coastal lovers of night gatherings around 150 EUR.

Winter Italy under the "ski" sauce - very delicious! Perhaps even the most hard-nosed, that is keen skier can not remember the names of all the Italian ski resorts ... so that there is all - even half! They are big boots to do a lot: high and low, complex and simple, short and long, with all kinds of exposure and relief (judge for yourself on the satellite map). And all of this diversity, it is necessary to pay tribute to the skilful Aboriginal maintained in excellent condition and covered by a network of lifts. Add to this a generous ski passes, sometimes covering entire regions - and the answer to the question "Why do millions of skiers each winter, despite the quite tangible price chosen was Italy?" Will become obvious to you. The income level of the majority of the Italian winter vacationers - Intermediate and higher (in the same way as their level of skiing skills), the country rides a lot of youth companies and families with children. Oh, I almost forgot: there is another category of tourists - fans of the "Nežárkou ekskursionki." They go sightseeing trips around the country during the cold season to avoid summer heat and crowds. However, initially often classical routes of travelers end up in the same place and most of the other - on the slopes.

Shops tend to work all day - from 9:00 to 20:00, some are open on Sundays. Lunch is usually from 13:00 to 15:30. In resort areas shops are often open until late at night and on weekends.
From Italy you can bring straw hats, brooches with different types of Venetian masks, porcelain dolls and clowns. There are a lot of fur clothes and shoes, quality leather goods (jackets, bags), good prices for Italian fashion sells clothing, knitwear, beautiful linens, china, crystal, jewelry and costume jewelry.
You can make a good buy in the "Outlet" - large stores in the suburbs, where a substantial discount on sale items leading Italian designers.
In the "capital of fashion and design," Milan shops and boutiques of famous Italian and international brands. Most located on Via della Spiga (Via della Spiga), Via Manzoni (Via Manzoni), Via Sant'Andrea (Via Sant 'Andrea) and Corso Vittorio Emanuele (Corso Vittorio Emanuele).
Second and third places in the ranking after Milan "fashion cities" occupied Rome and Florence. The main shopping streets of Rome considered the Via dei Condotti (Via dei Condotti), and Florence - Via de Tomabuoni (Via de 'Tornabuoni).

Cuisine and restaurants in Italy