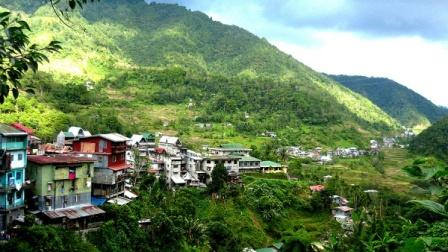 Republic of the Philippines, Philippines - a country in Southeast Asia. It consists of many islands in the Pacific Ocean between Indonesia and Taiwan
The tropical climate, which has two characteristics: All year round high temperatures and high humidity. There are two seasons: dry (December - April) and rainy (May - November). The wettest period - from June to October. At the same time, the resorts are located "inside" of the archipelago, have a pronounced rainy season.
The average monthly temperature in Manila, ° C: January 25, February 26, March 27, April 28, May 29, June 28, July - September 27, October 26, November - December 25.

Season in the Philippines

In the Philippines, there are three seasons: hot (March-May), rainy (June-November) and cold (December-February).
The best time to visit most of the resorts in the Philippines - from December to May, however, is that the beginning and end of the rainy season shifts, and the regions are influenced by various cyclones. For example, in the eastern part of the Philippines (Eastern Mindanao, Southern Leyte, Eastern Samar and southeastern Luzon), seasonality is usually reversed, with the wettest month in December and March. And in some parts of the country such as Cebu, the weather tends to "moderation" in all seasons.
Another important phenomenon in the Philippines - a typhoon. Although the peak of their accounts for the period from July to October typhoons may fall on the coast at any time. Least likely to typhoons in the period from January to April.

You can exchange money at the rate close to the official, it is possible only in the major cities - Manila and Cebu. In the provincial cities of the course will be somewhat less favorable.
Most shops, restaurants and hotels accept credit cards Visa, Master Card and American Express. The most popular are considered "credit» American Express.
The size of "service charge" included in the bill, is 5-10% of the total. In addition, maintenance personnel decided to give an additional tip - a few coins brought by putting out. A number of hotels in the percentage of "service charge" is 15%.

Safety of tourists in the Philippines

In the Philippines periodically befall earthquakes, typhoons, floods, volcanic eruptions, landslides and other natural disasters. Suppose, however, this list is not too cute scares you (and your visitors): the vast majority of disasters more frightening his great name, rather than the consequences. For example, Mindanao lies outside the "zone of typhoons" and during their passage subject only showers. A typhoon that happen in the South Visayanah and Palawan, usually last no more than a couple of days. Overall, during the period of cyclones and storms most frequent nuisance for tourists becomes cancellation of flights at the airports and roads impassable.
Traditionally, the Philippines should take care not to use unboiled water or cleaning teeth or drinking. It should also be heat treated milk (if it is not pre-pasteurized) and milk products, meat, fish and vegetables. Fruits enough to thoroughly wash and clean.
In all other respects the Philippines is quite an adequate level of safety, as the locals are known for friendliness and good knowledge of English, even in the provinces. So reasonable precautions one of those "do not leave items unattended and wary of pickpockets in large metropolitan areas" would be sufficient.
In the Philippines speak English and Tagalog dialect. In the more southern provinces of Cebu and speak other, very different dialects. English - the second official language in schools mandatory, and it is almost all fluent. Less commonly used Spanish.

The islands are spread hotels "bungalow" type, almost no multi-story: the state cares about preserving the natural landscape. Recently, the popular (and not so) resorts Philippines began to appear more and more famous hotels in the world "chains." However, the number of stars on their facades are not always accurately determines their well-trained staff: the slowness of Aboriginal has long been a byword.
Standard voltage is 220 V, 60 Hz. Sockets found as two (American sample) and three pins. It is better to ask for an adapter on arrival at the hotel, at the reception.
In the Philippines, everywhere sold inexpensive coconut oil, which, according to the assurances of the sellers, the best way to protect against sunburn.

Cuisine and restaurants of the Philippines

Philippine cuisine is a unique blend of Eastern and Western cuisines: Malay, Spanish and Chinese. Rice is always served on the side dish to the main course, which is often cooked seafood - lobster, crab, shrimp, clams, various species of fish. When ordering food tourist chooses a method of its preparation. The most popular options - grilled with garlic butter, or fried in sweet and sour sauce.
Traditional drinks - variety of fresh juices, soft drinks and light coconut milk "beech", as well as iced tea and coffee, especially the local version of "Barack." Alcoholic beverages: local beer, rum Filipino, different wines made on the basis of coconut milk "to" palm wine "Lombonak" and others.
In restaurants tourists should specify the desired sharpness of dishes - in the local cuisine is often used hot peppers. Maintenance personnel decided to leave "tea" from a few coins brought change.

Activities in the Philippines

The Philippines is famous for its emerald green rice fields, bustling metropolises, painted graffiti "jeepney", smoldering volcanoes eyed tarsiers and Asian buffalo. The islands are in great demand among young people, couples, eco-tourists and divers. Beach regulars and divers will enjoy in the Visayas, and, behold, attract adventurous desert coastal areas, where they are easily able to pitch a tent.
The highest point in the Philippines - Mount Apo (2,954 m), located on the island of Mindanao. Overall, the Philippines has more than three dozen volcanoes, among which more than 20 existing ones. In the list of the most active in the order of the number Mayon volcano (2462 m), Taal (311 m), Kandaon (2435 m), Mount Bulusan (1565 m).
Mayon has an almost symmetrical shape, for what, in fact, has been nicknamed as the "perfect cone". The volcano rises in the eastern part of the island of Luzon, forming the northern boundary of the city of Legazpi, the largest in the region Bikolskom. The last time the volcano erupted in 2009.
Taal is located 50 kilometers south of Manila, and overlooks the island on Lake Taal, and together they and the volcano and the lake, represent one of the most picturesque sights of the Philippines. Although the volcano has not erupted since 1977, he occasionally showed signs of seismic activity.
Kandaon Negros Island is a favorite destination for mountaineers and a part of the national park, but also on the slopes of the volcano are 3 hot springs. The last time the volcano erupted in 2006.

Manila - a conglomeration of 18 cities that make up a single metropolis. It is interesting museum decorated national hero Dr. Rizal and its National Park, a memorial to the mosaic map of the battle for the Philippines, the national exhibition of WOW Philippines, old stone churches and museums.
In the old part of the capital is an interesting Santiago (16th century), miraculously survived after the fierce bombing of the city in 1945. No less interesting are the Manila Catholic cathedral, the Cathedral of St.. Augustine, as well as street Roxas Boulevard, placed under the many places of entertainment for adults.
At 250 km from Manila, in the province of Benguet, interesting mountain resort of Baguio - "summer" capital of the country, located at an altitude of 1,525 m above sea level. In addition to the mild climate and clean air, where you can find interesting attractions: Mansion house (summer residence of the government), "Temple Bells' scenic crystalline massifs surrounding rocks and ancient tombs. Located near the Gulf of Lingayen with "a hundred islands", which is actually 400.
Until the pile: snorkeling, water skiing and parasailing, travel to the islands by canoe, trekking and mountain climbing, cycling and caving, beach volleyball, frisbee and basketball, golf.
Some resorts are very lively nightlife - nightclubs, discos and disco-bar, open dance floor, beach parties, casinos and gaming halls. However, most of the night "party" absorbed by the hour or two nights.

6 things worth doing in the Philippines

Have a picnic on the shores of beautiful Lake Cebu island of Mindanao.
Take an interest in the Chinese temple in the city of Cebu on Friday to 11 am Do your wishes come true.
At any Philippine village to see the real cockfights, which are held on Sundays.
See the famous Chocolate Hills on the island of Bohol.
A ride on the underground river in Puerto Princesa on Palawan Island, which is a list of the main attractions of the Earth.
Given to local craftsmen of national massage - hilot on reception at the healer.

Diving in the Philippines

Diving in the Philippines - one of the brightest and most diverse in the world. Another would be: tropical seas washing seven thousand of the Philippine Islands, constantly enriched by currents coming from the coast of Japan, from the Pacific Ocean, the South China Sea and the Indian and even the legendary "sea dive" Sulawesi. Therefore, off the coast of the archipelago is an amazing variety of corals, sponges and gorgonians, fish and shells, invertebrates and other marine life.
Almost every island has its own is worth the dive site. The most advanced dive structure in Manila (see "Diving in Manila"), on the island of Mindoro, where the legendary park Puerto Galera (see "Diving in Mindoro") and on the island of Palawan ("Diving in Palawan").

Puraran Beach on the island of Catanduanes (Catanduanes), which is south-east of Luzon, is considered one of the main surfing areas in the Philippines. To the northwest of Manila you can ride the wave in Bagasbase San Fernanado or San Juan. Northeast Luzon Baler known small town in which, incidentally, filmed several famous Hollywood movies. All of these places are not more than four hours' bus ride from the capital. Other popular surf spot on Luzon: Pagudpud, La Union for beginners, Vigan and Zambales to the west of the island. Last is perfect for beginners, because it has a comfortable sandy entrance into the water.
Boracay is also possible to find a good wave - on the beach Balabog. In January there is even held international cup International Funboard Cup.
Yet, reviews the pros, the best place for surfing on the "Fili" - an island Shiragao and spot Cloud9. Located north-east Mindanao, Shiragao not suitable for beginners: everywhere reefs and jagged rocks. But the right wind blows all year round, and especially - in September and October. At that time the island held the World Cup of Surfing. Not so long ago on the island built the airport, so it is now easy to get there - a direct flight Cebu Pacific or Cokaliong Shipping Lines ferry from Cebu.