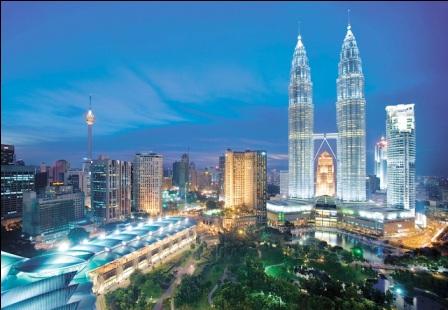 The islands of legends

Kuala Lumpur, or "KL" as it is affectionately called Malaysians, financial and trading center of Malaysia, is always busy and crowded. Inspection of the city usually starts with familiarity with the business center of the "Golden Triangle", so called because here the highest prices in the country to land and property. Despite the fact that the capital is growing rapidly and is built, it still retains its historical heritage. The old buildings, such as the Sultan Abdul Samad building, built in the Moorish style building or an exclusive club Selangor remaining from colonial times, carefully preserved and restored.
In the heart of the "concrete jungle", you can still find places where nature reigns. In the city center stretches a huge park of Taman Tasik Perdana, giving a welcome coolness and the opportunity to relax, to do sports. Any tourist chooses what he wants to see and how to want to relax in Malaysia. You can visit interesting places in the capital and see such sights as: Petronas Twin Tower (Twin Tower Petrona), Batu Caves (Batu Caves), Birds Park (Bird Park), Orchid Garden (Garden Orchid), museums, zoos, Royal Palace, Chinese temples, etc. "Business Card" Kuala Lumpur and throughout Malaysia - the twin towers. Constructed oil company Petronas for its headquarters, the skyscrapers were the tallest buildings in the world until 2004 tower height - 451 meters, in them - 88 floors. On the 41st floor of a bridge between the towers Skybridge. And with 41 floors on 83rd lucky sightseeing elevator. You can get up to the 87th floor and from there, with a glazed observation deck, look at the city and its surroundings.
For those who want privacy and a relaxing stay you can explore the rainforests of the country, enjoy the tranquility of the sea, relax on the sandy shores to engage in underwater sports. To do this, go to the island of Penang, which is rightly called the "Pearl of the East". Once the island was a tropical jungle of palms Betelskogo walnut, which gave the name "Pulalu Penang" - island Betelskih nuts. Today it paradise idyll of peace and quiet - a golden, and on some beaches of white powdery sand, clear blue water, small caves, fenced off from the outside world with huge boulders. Here there is something to see. "Butterfly Park", with more than 5,000 unique instances where the vegetation is different unusual variety. Tourists often visit Batikovuyu factory, surprising because the magic transformation of silk fabrics in bright artwork. Bold visit the "Temple of snakes", which is usually in the corners are folded in a tangle of snakes. And on certain days here (for some unknown reason) slides countless snakes. On this island you can see the statue of the reclining Buddha, which the length of 33 meters. The largest group of 104 islands is the island of Langkawi. It hosts international maritime and aerospace exhibition.
The famous landmark of Telaga Tujuh (Seven thresholds), where a waterfall falls from a height of 91 meters, rolling through 7 rapids. It is a popular place for picnics and swimming. And in the depths of the island Lake women become pregnant - quiet beautiful lake where the dream of posterity women should drink water and plunge into it. In the south-east of the island is located crocodile farm, where arranged the whole show. A special romantic mood has Tioman Island. No coincidence that many newlyweds are spending their honeymoon. An atmosphere of calm and relaxation. The pride of the island is a golf club. Malaysia is not only a resort area, but also one of the most advanced in education and technology in South-East Asia. Draws are also relatively low cost and high educational standards. Well, for those who like shopping - it's just a heavenly place.
Prepared by the guide of the highest category Dilbar Abdunabieva.

Given that the country is located near the equator, the climate of Malaysia is characterized as the equatorial - hot and humid throughout the year. The annual average temperature is about 27C, and the annual rainfall - about 2500mm.

Malaysia has 20,140,000. Man. Some of them are: Malays, Chinese, Indians, mestizos, and the ancient tribes Kadazan, Iban and others.

Throughout the year, we recommend light, loose clothing made from natural materials. For special occasions men suit suit and tie or a shirt batik with long sleeves, and women - dress or suit with long sleeves.

Malaysians are trying to keep their country clean, failure to do so is punishable by a fine of 500 small. ringgit.Nedopuskaetsya any disrespect to the King or the Prime Minister.

The official religion of the country - Sunni Islam. In addition, Buddhist, Hinduism, Confucianism, Christianity and other religions.

Water is generally safe to drink, but all safer to drink boiled water, tea, coffee or drinks at butylkah.Rekomenduem take with medications you normally used to enjoy.

Here you can buy exclusive clothes and outlandish rare thing preserved in an antique shop since colonial times. To gift is very well suited refined products from the local tin songket or batik, hand-painted by the fabric.

Provide for duty-free import 200 cigarettes, 60 cigars or 225 grams of tobacco and 1 liter of alcohol. Forbidden to import: drugs -this importation of drugs and their use of the laws of Malaysia, the death penalty, regardless of nationality, skin color or religion, and toxic substances, goods, coins or banknotes of Israel, pornographic publications, radio, meat, mushrooms, seeds, primates, over 100 grams of gold, weapons of any kind, including toy that resembles the battle. Knives with blade throws regarded as edged weapons. .When Entering the country have to pay $ 10 -taksa for entry into the country. Items for personal use are exempt from duties.
The import of drugs, weapons, pornography, printed in Chinese and Chinese medicine. The export of rare plants and animals, antiques, products without a certificate.

In Malaysia, flying more than 40 airlines in the world. From Thailand to Malaysia and Singapore can be reached by rail. The main cities of the country are also linked to international communication. International express trains ply comfortable. All Malaysian island resort can be reached not only by air but also by ferry. Roads are the best country in the region. Freeway runs north-south across the peninsula connecting Thailand, Malaysia and Singapore. In the presence of the international driver's license, you can rent a car. Buses owned by different private companies, but the activity of these companies is coordinated by the municipal authorities. In Malaysia, the right-hand traffic. Many hotels have free shuttle buses to the city center and back. Between major cities regularly ply comfortable buses. Directions them relatively inexpensive.

Kuala Lumpur - Jame Mosque, the National Museum, Batu Caves, Mimalend Leisure Park and Zoo; Hindu temple dedicated to Lord Sri Mahariammanu. Water Park Sanuey Lagoon, Snake Temple, Kek Lok Si Temple. Fort Cornwallis; Museum and Art Gallery in Penang, Botanical Gardens Waterfall "Seven Wells", Caves Gua Charity, Crocodile Farm.
Malaysia is hot and humid throughout the year, so you do not have to wrestle with choosing a time to travel. However, during the rainy season, which lasts from November to January, on the east coast can be quite rainy. The best time to observe the turtles - from May to September. Most Malaysian holidays associated with Ramadan - the ninth month of the Muslim calendar. The three-day festival of Hari Raya Puasa ends the holy month and the sweets festival Hari Raya Haji confined to the successful completion of the Hajj. Chinese New Year celebrations held in January or February and is accompanied by dances and carnivals. At the end of January in Kuala Lumpur and Penang Hindus take part in the festival of Thaipusam, banned in India because of its masochistic inclination. In May, on the island of Kalimantan passes picturesque collection of tribes Kota Belud Tamu Besar, during which you can wander through the huge craft markets or watch the traditional Aboriginal ceremonies.

Malaysia is generally not tipping. In hotels and restaurants do not, because the expense is already included 10% service charge. On the tea can be given if you are satisfied with the speed and quality of service.

The official language of Malaysia is Malay. Also distributed English, which is compulsory in local schools. Police and officials speak English freely.