﻿
﻿
GOGO KOREA
The Korean Peninsula is located in North-East Asia. On the northwest side of the border between the Korean peninsula and in China passes through the river Amnokkang Sports Club (Chin. Yalu), and from the north-east - the Tumen River (Chin. Tumen) separates the peninsula from China and the Russian Federation.
The Korean Peninsula bordering the Yellow Sea to the west and the East Sea - to the east. On all sides it is surrounded by numerous islands, the largest of which are Jeju and Ulleungdo.
From north to south area of ​​the peninsula stretches for 1,030 km, and from east to west - only 175 km. The territory of the Republic of Korea, located in the southern part of the peninsula, occupies 100.033 square meters. km., and a population of 48,580,000 million. people as of 2010.
The Climate
Climate Korea refers to the continental monsoon and in relation to temperature. Seasons are divided into four seasons - spring, summer, autumn and winter
It'S Spring
Spring in Korea warm and lasts from late March to May. At this time of year a lot of different colors adorn the hillsides and plains of the country.
The Summer
From June to early September in Korea summer. This is the hot and humid season
Autumn
Autumn lasts from September to November, and is characterized by crisp weather with sunny days. This is the best time of year to visit Korea.
The Winter
Winter in Korea begins in December and ends in mid-March. The weather at this time of year can be very severe because of the cold air from Siberia. Abundant snow in the northern and eastern parts of the country provide excellent conditions for skiing.

At the beginning of the 1st century on the Korean peninsula formed three feudal states: pakcha, Silla, Goguryeo. At the end of the 10th 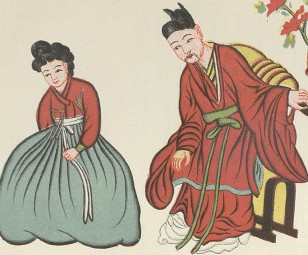 century the peninsula was completely united under the rule of Koryo Dynasty. In the 13-14-th centuries, the country fell under the rule of the Mongols. Later Korea at different times was under the control of the Chinese emperors. At the end of the 19th century according to the Sino-Japanese Treaty of Korea was recognized as an independent state.
However, in 1910, Japan occupied Korea, incorporating it into sostoav Japanese empire as a province of Chosun. In 1945, according to the Potsdam Conference, the 38th parallel was designated as the line dividing range of the Soviet and American troops. In 1948 was formed the two Koreas. The Republic of Korea was proclaimed on August 15, 1948. In the years 1950-1953 the country experienced a devastating war with North Korea. The war almost destroyed the economy of the country. May 16, 1961 in the country was a military coup, after which the military ruled the country for more than two decades. It was the most brutal reign of General Chun Doo Hwa-on, which lasted from 1979 to 1987, when as a result of free elections came to power, President Roh Yes Do protege Hwa Chun Doo-na. His administration was involved in financial fraud and the elections in December 1982, Kim won Em himself. It was the trial of two former presidents on charges of financial fraud and treason. The Republic of Korea is a member of the UN, GATT, IMF, ILO, WHO, UNESCO.
﻿