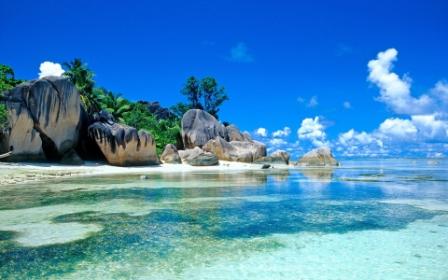 My holiday in Sri Lanka can be briefly defined as follows: away from the hustle and bustle, close to the sea and nature. It is unlikely that in the world there is a more "leisurely" country than Sri Lanka: nobody here is in a hurry, all enjoying life - including staff at the hotel (to the top-end establishments in Sri Lanka, however, does not apply - there are all running in the soap to please guests). Most of the attractions in Sri Lanka natural, just like most of the entertainment. The noisy discos and smoke yoke until the morning is not in favor, but the picnic, fishing or barbecue on the beach - as much as necessary. Well diving itself. And that's what Sri Lanka can not please, it's proximity to our vast: a long flight here.
In general, to determine the person to whom exactly like Sri Lanka, is very simple. Firstly, in its first passport is not enough blank pages left. Secondly, it is either a person deceived the world culture and history (and the ancient Sri Lanka is very rich in interesting monuments), or - a desperate sea daredevil who wants that in addition to palm trees, sand and the sea, was at hand and Diving center, and the headquarters of the surfers. Thirdly, it will certainly look askance at your fragrant cup of tea. After Ceylon, also known as Sri Lanka, supplies a quarter of the world this drink.

The capital of the country - Colombo (Colombo).

The climate of Sri Lanka

The climate on the island is tropical, with monsoon seasons pass. Almost 95% of all rainfall occurs during the rainy summer season from May to the end of October, and mainly at night. The rest of the year is quite dry, so the period from November to the end of April - the most favorable for a holiday in Sri Lanka. The temperature on the island does not change throughout the year and is 28 ... 30 ° C, with the exception of mountainous regions, where it falls in the winter and +10 ° C. Water temperature averaged +26 ° C.

The coast of Sri Lanka - is more than a thousand kilometers of beaches with soft sand, coconut trees, coral reefs and colorful fish in coastal waters. Two well-known beach of Sri Lanka from Tangalle to Weligama Bentota and entered the top 10 beaches in Asia rated magazine Forbes.
From November to March the northern winds blow, so quiet and comfortable weather, the sea should look to the west and the south shore of the island. From April to October, blowing west monsoon, so the calm water and cloudless weather to travel to the east coast.

Currency exchange best at Colombo airport. Thus obtained makes sense to keep the check until the end of the trip: in this case departing from Colombo will convert back unspent money in the bank, local airport at the rate of purchase. In addition, the currency can be exchanged in any hotel and the bank. Banks are open from 9:00 to 13:00 from Monday to Friday. Large hotels and shops accept international credit cards. Foreign currency entering the country must be declared. ATMs are in almost all cities of the country.

Shopping and shops in Sri Lanka

Sri Lanka is known worldwide for its precious stones: sapphires, rubies, topaz and so on. D. Acquire the best jewelry in specialized stores, requiring a corresponding receipt or certificate. Also known around the world Ceylon tea, spices, crafts: masks, batik, leather little things. In the cities, you can also buy cheap textiles.
Usually shops are open on weekdays from 9:30 to 17:00, and on Saturdays - from 9:30 to 13:00.
In markets and in private stores should bargain (you can reduce the price by about 30% compared to initial). But in the state stores, supermarkets, shopping malls and duty free shops at the airport all prices - fixed.

The whole world knows the traditional Sri Lankan spices, aromatic tea and all sorts of varieties of exotic fruits. "Curry" - specially prepared with meat or vegetables with spices and rice - are cooked perfectly. In general, the meat consumed is relatively small - the cows are considered sacred animals. But local tea - above all praise: fragrant, strong and inexpensive. And the fish dishes and a variety of seafood is simply not considered.

Divers around the world Sri Lanka attracts a variety of corals, marine life with an unusual name and a view (angelfish, Moorish idols, parrotfish), dolphins and whale sharks, which can be seen from March to April. But the main feature of diving in Sri Lanka is to visit the underwater cliffs, caves and shipwrecks. With the city opened about 20 dead Courts 19th and 20th centuries. at depths of 8 to 30 m. It tankers, ships, cargo vessels, merchant ships and even a modern cargo ship. Many of them are well preserved, and you can even swim inside them.
Large diving centers (open from October to April): Bay Beach Aqua sports (PVT) LTD - PADI (Weligama), Confifi Marina - PADI (Bentota), Ubr Diving Center (Unawatuna), Diving Center - PADI (Dickwella), Hikkaduwa Diving Shcool - PADI (Hikkaduwa).