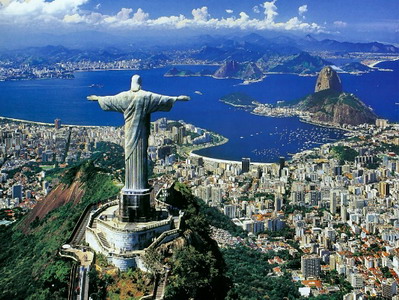 Brazil - the largest in area and population in South America. It occupies the eastern and central part of the continent. It borders French Guiana, Suriname, Guyana, Venezuela, Colombia, Peru, Bolivia, Paraguay, Argentina, Uruguay. From the east by the Atlantic Ocean, which owns several islands (most important - Fernando de Noronha).

Amazon Jungle, golden beaches of Rio de Janeiro, delicate aroma of coffee, the roar of the mighty waterfalls - all this, like a magnet, attracts millions of tourists to Brazil from around the world. In addition, the beaches in the country - entirely from around the world (one of which is Copacabana), the sea is warm and clear, but the Brazilian cuisine - as well as about Brazilian women - tourists invariably say breathlessly. One sadly fall into this story (at least in Russia) can only travelers with a very bulky wallets - affects the high cost of tours to Brazil, which depends primarily on the value of a transatlantic flight. 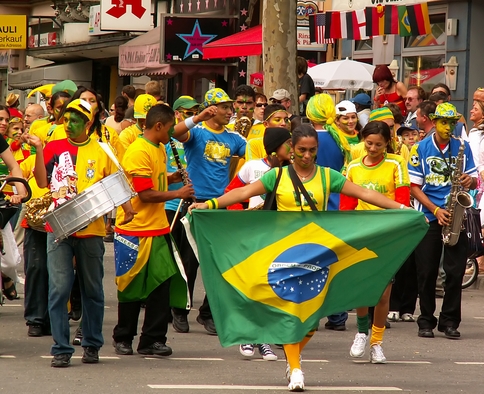 Carnival in Brazil - another popular tourist attraction. Travelers who are sent here radikarnavalnogo processions, more demanding on the quality of rest and usually book the 5 * hotels. But children do not go here practically.
The capital of the country - Brasilia.
Resorts - Angra dos Reis, Buzios, Salvador.

In Brazil, there are about 20,000 hotels, most of which are located in Rio de Janeiro, in the southeast and on the ocean coast. Main number of hotels in Brazil - non-network, owned by independent companies.
Quality of service in the Brazilian hotel is nice, though it and feel some sluggishness, which however, inherent to almost all areas of Latin America. Hotel class in the country is measured not by the familiar star system, and by type of service provided. Therefore, coming here for the first time, you should inquire in advance about the services offered hotels. The major hotel chains in Brazil are: Melia, Atlantica Hotels and The Blue Tree. This high-class hotel with the appropriate level of prices. Very popular among tourists enjoy a network of Accor Group.
Brazilian hotel rooms, unlike hotels in North America, are not equipped with irons, ironing boards and coffee makers. Even in the most luxurious hotels guests are offered the most basic toiletries. Almost all the hotels Brazilian breakfast is included in the room rate.
In Brazil the hotels are equipped with all the safe room, starting with three-star. In the case of accommodation in hostels all valuables should be deposited to the administrator or to keep to yourself.
In the big cities of the country are widely spread apart-hotels that offer better prices, home comfort and great facilities. On the other hand, this type of hotel does not have its own restaurants, pools and other public facilities.
But still the most popular type of accommodation in Brazil are lounges - two small and three-star hotels as bungalows or huts. In hotels such service is compensated by the lack of national color.

Tours and attractions in Brazil

Brazil - a huge, stunningly beautiful country in South America. There are mountains and plains, tropical forests and savannas, scenic national parks and excellent beaches on the Atlantic coast. Brazil - is an interesting country with its own history, culture, ancient traditions and, of course, traditional Brazilian cuisine.
The capital of Brazil, Brasilia - young modern city built only in the middle of the last century. This is very beautiful green city with lots of parks located near the Paranoá reservoir at a height of 1100-1200 meters above sea level. Brasilia was built on well-developed plan and aerial view of the city resembles the shape of an airplane. The architectural solution of the central city square "Three Powers", which are mainly administrative and public buildings, impresses with its bizarre geometric proportions combined with a refined elegance. The masterpiece of modern architecture is the Cathedral of Brasilia, built by outstanding Latin American architect Oscar Niemeyer XX century. Interestingly, the basic premises of the cathedral are located underground, while the top is only the original shape of the dome of concrete and stained glass. Among the finest examples of modern architecture stands out the Palace of the National Congress, the Presidential Palace "Alvorada" Palace of Government "Planalto", the Ministry of Foreign Affairs, Justice Palace, the Palace of the Supreme Court, State Theatre, the National Library and National Museum.
Rio de Janeiro (the former capital of Brazil) - an evergreen city with lush tropical vegetation and beautiful exotic flowers. The city also has many parks and botanical garden, which is considered one of the best in the world. The symbol of the city and its hallmark is a huge statue of Christ the Savior. It is located on the Corcovado mountain and its summit offers stunning panoramic views of the city, the Atlantic coast and the Guanabara Bay, the entrance to which is a hill "Sugarloaf" - another card of the city (on the top of it can be reached by cable car). The city is famous for its excellent beaches, the most famous of which Ipanema and Copacabana. Among the architectural attractions of the city are the most popular variety of churches (Mosteiro de Sao Bento, San Antonio, Capuchin monastery, the church of the Virgin Lampedosa, Candelaria Church and the Church of Saint Lucia) and the palace and park complex Quinta da Boa Vista. Also very interesting exposition of the National History Museum and the National Museum of Fine Arts. Known Rio de Janeiro and its world famous "Brazilian carnival."
Sao Paulo - the economic center and largest city in the country. The architectural ensemble of Sao Paulo remarkable mix of different styles and eras. Old buildings are perfectly combined with the giant skyscrapers of glass and metal. Central artery of the city and at the same time it is a landmark of Paulista Avenue - the center of business and cultural life. In Sao Paulo is one of the largest neo-Gothic churches in the world - Catholic Cathedral of Sao Paulo, hitting its magnificence and grandeur. Also in the city a lot of variety of museums. The most famous of them Museu Paulista (Historical Museum), Museum of Art, the Museum of Painting, Museum of Archaeology and Ethnology of the University of Sao Paulo, the Zoological Museum of the University of Sao Paulo, Impiranya Museum, the Museum of the images and sound collection Bandeirantes Palace, the Memorial of Latin America and Memorial immigrants. The perfect place for walking - city Ibirapuera Park. Also worth a visit Sao Paulo Zoo (famous for its excellent collection of tropical birds) and snake sanctuary "Butantan." Rich and diverse, and also nightlife.
Because of the natural attractions of Brazil's most exciting impressed by the Iguazu Falls, located in the eponymous national park on the border with Argentina. This is a unique creation of nature is a complex of nearly 300 separate waterfalls, the largest of them is called "Devil's Throat" (the height of the fall of the water reaches 82 m). Iguazu Falls is considered one of the most beautiful waterfalls in the world. Next to him, even the famous Niagara looks quite modest. By the interesting natural and historical attractions of Brazil are also Zhau National Park, National Park Serra da Capivara, Sulstisiu Archaeological Park, Emas National Park, Protected Area Chapada dos Veadeiros National Park, National Park Serra do Katimbau and archipelago of Fernando de Noronha.
The abundance of historical, architectural, cultural and natural attractions of Brazil attracts huge number of tourists from all over the world.

Spreading from the Pampas to the coast, framed by palm trees, Brazilian cuisine - a powerful mix. Each spoon a bit of history, a reflection of the great men who have left a big impact on this vast country. Gently spicy, but not burning, fat, but with the freshness of lime, healthy, abundant, with complex flavors and aromas of Brazilian cuisine also combines the amazing variety of ingredients and cooking methods, it is now merging the old and new worlds ....

In expensive restaurants and bars - 10% of the bill (if it does not include a service charge); in cheap eateries - Real Madrid 1-2; Cafe on the beach - are not accepted; the porter at the hotel or airport - 1 real; taxi driver - rounded by in a big way.

Most shops are open from 9 am to 18.30 am on weekdays, from 9 am to 13 am on Saturdays. Large stores are open until 22 pm, supermarkets can work round the clock. Banks are open weekdays from 10 to 15 hours. Currency exchange offices usually work from 9 to 17:30 h.

It is recommended to pre-vaccination against hepatitis A and B and malaria desirable yellow fever vaccination. High levels of sexually transmitted diseases. In the Amazon, a lot of tropical diseases (repellents should be used). Tap water can not drink.

Brazil is among the top ten most criminal countries. Do not wear expensive jewelry, large sums of money to leave on the beach without supervision clothes, cameras and wallets, to accept invitations from unfamiliar people. Do not go to areas of the torch (slums) even in the daytime. Never leave your documents, money and jewelry in the hotel room (hotels are not responsible for the loss of things out of the room).